The elders are bridges to the old way

They are the custodians of the culture, for it is by the language and the stories that a people’s culture and history are known. Some of the stories of the elders of Neyaashiinigmiing are told in two books about them published by the Band.

Here are stories of great hardship: residential school brutality, sacrifice and pain from the wars, hostility to their ancient claims and rights, poverty and the grinding effects of the Indian Act.

And yet, shining through the hardship is their sense of dignity, humor and determination that must be at the heart of the reason we have survived as a people. Not only survived, but thrived, for that spirit can be seen in the young as well. It can be seen in the advances the Band is making, in how it is turning court-recognized commercial fishing rights into a viable economy and Nawash into a leader in fisheries management, and in how we are re-asserting our ancient responsibilities to all our relations by intervening when environmental harm threatens our traditional territories.

Elders are intricately involved with these initiatives. They have appeared in court to give testimony to our traditional ways. They are involved in running a successful alternative justice program that uses traditional ways to reintegrate into the community people who have committed offences. They are
teaching Anishnabemowin (the Ojibway language) in the local schools and in the community. A 2004 Statistics Canada report indicates that Native children who spend time with elders are more likely to do better in school.

Maadookii means “sharing” in our language. It is the name of the seniors’ group at Neyaashiinigmiing and also the building in which they meet. 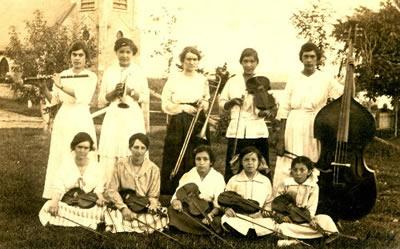 Seniors are a growing segment of our population. We estimate that by the year 2010 our on-reserve elder population will more than double. Many more
who might be living off reserve will want to return home.

The first building was built by volunteers from the community. Since then, the Maadookii Centre has become a favorite meeting spot for other programs and activities. It is frequently used to host meetings and dinners with visiting groups from outside the reserve. Wakes are held here and are well attended by family, friends and the community. It is truly a sharing place, reflective of the elders themselves.

The Maadookii Centre is home to a number of services and activities for seniors.

Visit our webpage at: www.maadookii.org