Age estimation is the foundation upon which most fisheries management tools are built.  Currently, fisheries managers rely heavily on calcified structures to estimate age-at-maturity, age-at-harvest, and age class compositions.  Data gathered from calcified structures are employed to assess diet, condition, growth rate, number of spawning periods per life span, longevity, and mortality rate.  Based on otolith microstructure, hypotheses regarding  population delineation and early life history have also been tested.  Scales, otoliths (small bones inside the head of all bony fishes), and many other bony structures have been used  to estimate fish age for over 200 years.  Hoffbauer (1898, 1901) was considered to be the father of modern age estimation, although some accounts suggest that scales were used for age estimation early as 1888 and the first use of otoliths for age estimation was attributed to Reibisch (1899).  Fin-rays, operculum, interoperculum, and the cleithrum were all being used for age estimations as early as 1908 (Ovchynnyk 1962).

The general principles of calcified structure age estimation can be summarized as:

Those general principles represent the foundation for estimating the age of fishes. 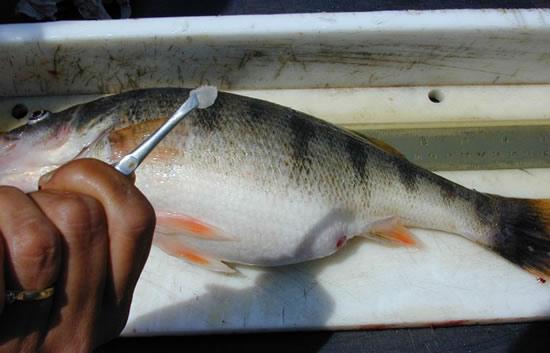 According to conventional thought, ridge formation ceases or slows during a certain time of the year, usually winter, and then resumes again once conditions become more favorable for growth.  The time between the cessation and resumption of growth results in a visually-distinguishable transition ridge (conventionally referred to as an ‘annulus’) being laid down on the calcified structure.  The transition ridge is therefore considered the feature which separates the previous year’s growth from new growth.  Based on that assumption, the key to establishing rigorous age estimation methodology is to determine the structure with the most reliable, permanent periodicity that can be synchronized with the Gregorian calendar for the species in question.

More precisely, if one can show that the number of structural features (‘transition ridges’ or ‘annuli’) on the calcified structures equal the number of years in the fish’s life than that structure can be considered valid for estimating the age of that species. 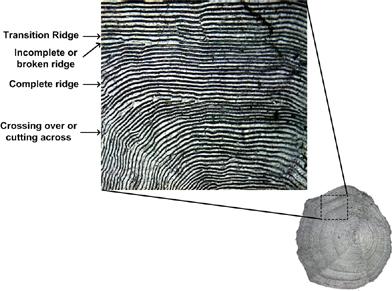